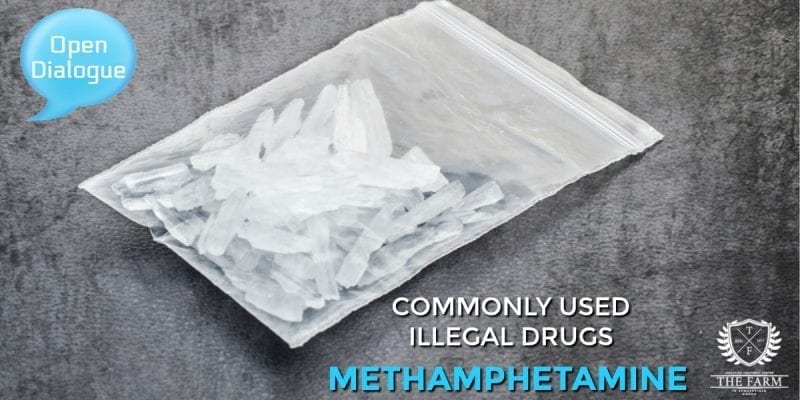 Developed in the early 1900s, methamphetamine gained popularity during World War II as a way to keep soldiers awake.  After the war, use became prevalent among college students, truck drivers, athletes, and homemakers who used the drug for its ability to create increased alertness, energy, and confidence; and suppress appetite.

Today, methamphetamine is one of the most commonly used illegal drugs in the world.

Most of the methamphetamine found in Canada and the United States is smuggled in from manufacturing “superlabs” in Mexico.  But meth is also being made domestically in home kitchens known as meth houses or cook labs, using inexpensive over-the-counter ingredients like cold medicine, and toxic chemicals like paint thinner, drain cleaner, antifreeze, battery acid, and hydrochloric acid.

Methamphetamine is available as a white crystalline powder that can snorted or mixed with water and injected; as a pill; or as clear and bluish crystals known as crystal meth, that are smoked.

Depending on how the drug is ingested will determine how quickly and for how long the effects of the drug are felt.  Smoking or injecting methamphetamine causes an immediate “rush” of euphoria within seconds.  Snorting the drug delays the effects for 3 to 5 minutes, and swallowing meth takes 20 minutes to produce an effect.  A methamphetamine high generally lasts 6 to 8 hours but can continue for as many as 24 hours.

Like many stimulants, methamphetamine is most often used in a “binge and crash” pattern.  Users try to maintain their high by taking more of the drug as the effects of the first rush fade. This binging is referred to as going on a “run” and can last several days.  During a run, users will give up sleep and food to maintain their high.

The euphoric feelings produced by methamphetamine results from the increased level of dopamine that the drug creates.  Dopamine is a neurotransmitter that controls the brain’s reward and pleasure centres; and regulates movement and emotional response.  Over time, by artificially increasing dopamine users become unable to naturally produce it, needing larger doses to experience feelings of pleasure.

Methamphetamine has a high potential for abuse and dependence. Tolerance develops quickly, some users having reported becoming hooked after just one use.  Physical and psychological symptoms of meth use also appear in a very short amount of time, and serious health risks including heart attacks, overdose and death are possible upon first use.

What are the Street Names for Methamphetamine?

How is Methamphetamine Administered?

What are the Short-Term Health Effects of Methamphetamine Use?

What are the Long-Term Health Effects from Methamphetamine Abuse?

Users who inject methamphetamine are also at an increased risk of contracting infectious diseases like HIV and hepatitis B and C.

If you or someone you know is using methamphetamine, get help before it’s too late.  Call The Farm and speak with a certified addiction counselor, 1-877-353-2777.  The Farm in Stouffville is a private residential addiction treatment centre offering personalized drug and alcohol treatment and counseling.