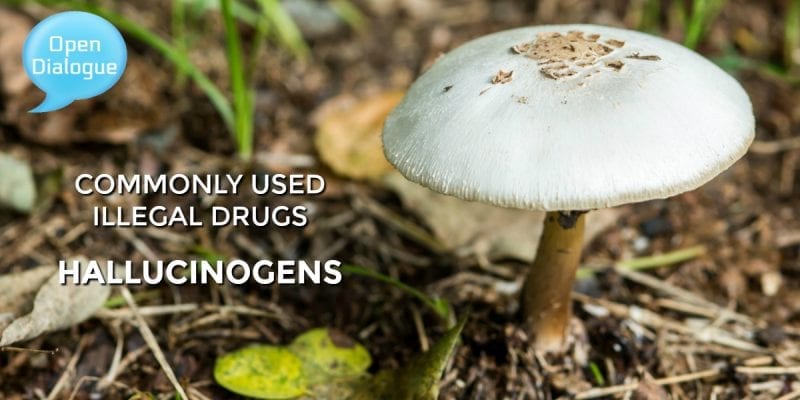 Hallucinogens, also known as psychedelics, are drugs that alter the user’s perception, thoughts and feelings leading to a significant distortion of their reality.  Hallucinogens can be found in some plants and mushrooms or be synthesized in a lab.  Although the specific mechanics of how hallucinogens work remains unclear, research suggests that their effect can be attributed to the disruption of communication between neurotransmitter systems in the brain and the spinal cord.

The history of hallucinogenic drug use goes back centuries.  Originally used by indigenous people worldwide for medical purposes and religious and supernatural rituals, the drug’s popularity exploded in the 1950s and 60s, when they were promoted for their therapeutic, mind and consciousness-expanding effects.  An opinion that was soon discredited after numerous “bad trips” were reported.

Hallucinogens however are not considered an addictive substance.  They can cause serious and even dangerous side effects, but they’re not physically habit-forming.  Their addictive quality stems more from their psychological effects. The euphoria, sense of detachment, and altered state of reality that these drugs create can lead to dependency.

The following is a list of the most commonly used hallucinogens; their street names; how they’re administered; and their short and long-term health effects.

What is LSD?  LSD is a combination of lysergic acid, a natural substance derived ergot fungus which grows on certain grains, and the synthetic chemical diethylamide.  LSD is sold illegally on the streets as a tablet, a capsule, a gelatin square, or as a small square of colourful blotter paper.

LSD is not considered a physically addictive drug; however, it can create a psychological dependency in users as the pleasure effects of the drug can be habit-forming.

What is Mescaline? Mescaline is a hallucinogenic ingredient found in peyote, a small spineless cactus grown in northern Mexico and the southwestern United States. The top of the cactus or the crown, consists of circular-shaped buttons that are cut off, dried and then chewed, grinded into powder, or soaked in water to produce a psychoactive liquid.

There is no evidence that mescaline causes a physical dependence, however some users may develop a psychological dependence to the drug’s hallucinogenic effects.

What is Psilocybin? Psilocybin is a naturally occurring compound found in more than 100 species of mushrooms grown in South America, Mexico and the United States.  When ingested, the psilocybin converts to psilocin, a substance which distorts the perception of objects and stimuli in the user’s environment, producing a mind-altering effect.

Psilocybin is not physically addictive, but some users may experience a psychological dependency to the mind-altering effects of magic mushrooms.

What is Ayahuasca and DMT? Ayahuasca is a hallucinogenic brew made from an Amazonian plant containing dimethyltryptamine or DMT, a psychoactive compound; and the Banisteriopsis caapi vine, which enhances the hallucinogenic effects of the dimethyltryptamine.  DMT while naturally forming is most commonly synthesized for recreational use.  While less potent than Ayahusaca, DMT’s effects are typically more dangerous and habit forming.

While the use of Ayahuasca and DMT doesn’t produce a physical dependence, some users may experience psychological issues resulting from “bad trips”.